I am delighted to say that we are back to regular training now! 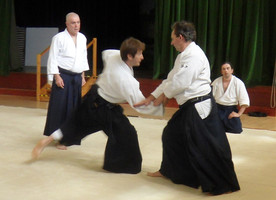 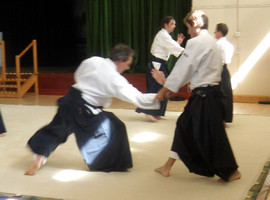 It is important to realise that the grouping of these techniques is not arbitrary.

The structure of these grades contains a logical progression - one which makes it possible to internalise principles.

These principles, once deepened into reactions, allow infinite variations against any form of attack; conventional or otherwise.

For each technique listed below both omote (interior) and ura (exterior) forms need to be known and demonstrated.

There is often more than one possible version (particularly in 3rd Kyu and above).  As a general principle, where there is a choice, the basic technique (often leading to a backward breakfall) should be performed first.  If time allows more advanced versions can then be demonstrated.

In the aikikai we do not signal our grade to others during the practice (badges or coloured belts). These grades are a personal progression for each of us - signifying the development of a personal, kinaesthetic repertoire.

The 'at least ... months ...' statements below come from the Hombu Dojo.  It is very unlikely that anyone would be able to learn what is required in these times.  For the vast majority of people much longer periods need to be envisaged.